What a puzzle this book is!

As I mentioned last time, I’ve spend the summer preparing to teach a course on Jane Austen (with a popular culture twist), which meant I was forced (oh no!) to read and watch what I’m calling “Austen-adjacent” texts. In addition to sequels, adaptations, and modernizations, this category also includes books that are none of those things, yet still bear some notable relationship to Jane Austen.

Sofia Khan first pinged on my Austen-adjacent radar via this list: “Austen Readalikes by Authors of Color.” The blurb notes that the book has been called a “Muslim Bridget Jones’s Diary,” which I took for more of a general categorization of the book as “chick lit” about a London Singleton, this time Muslim, navigating love and social pressure to marry. 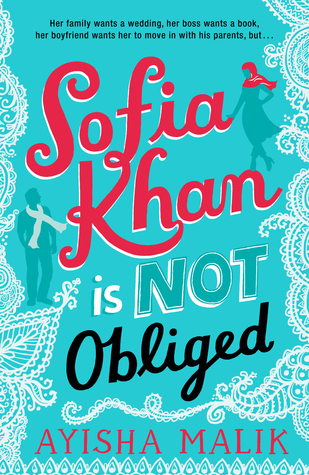 This clearly went beyond an elevator-pitch style resemblance for marketing purposes (“It’s Jaws in space with rabbit astronauts.”) As confirmed by the author’s note, Malik knows Helen Fielding’s novel well and set out to write the book it would be “if Bridget Jones were Muslim.”

In other words, this is an adaptation.

Which is funny, since Bridget Jones’s Diary is an adaptation of Pride and Prejudice. But just about the only thing Malik doesn’t take from Fielding, as it turns out, is anything that originally came from Austen. So in the end, it’s not so much “Austen adjacent” as it is “Austen twice removed.”

The thing is, Helen Fielding is a hilarious writer. Okay, granted, I’ve only read two of her books and one was the much-less-successful BJD sequel, but plenty of writers — let’s be honest, most male — get called comic geniuses based on the strength of one extremely funny novel, so I’ll willingly put her in that category too. And it’s not just me: a blurb from Salman Rushdie on my copy of BJD states: “A brilliant comic creation. Even men will laugh.” (High praise indeed…?)

Malik’s style isn’t unfunny, she just doesn’t have Fielding’s deftness with a sentence that ends in an unexpected place, her knack for laugh-out-loud one-liners, or the punchy pacing honed by BJD’s original milieu, a magazine column. So for the first hundred pages or so, Sofia Khan just reads like a duller Bridget Jones’s Diary. It’s saved, frankly, by the novelty of a protagonist with certain drastic differences from the typical romantic comedy heroine.

Just as Bridget’s frank foibles may have been fresh in 1996, Sofia’s devotion to God is something I have literally never come across in a mainstream romantic comedy, either in book or film form. A heroine worrying that the new window in the break room door allows passers-by to look at her butt while she prays there? A heroine refusing to consider a romantic prospect who seems insufficiently serious about his faith, yet also rejecting a set up with a religious guy who is much too conservative for her? These are concerns that many real women, Muslim or otherwise, navigate as a part of their dating life, but it’s a wild understatement to say they rarely appear in fiction outside the realm of religious publishing.

And yet, this is also where the novel begins to struggle with itself on a metafictional level, a struggle that, quite frankly, gets awkward at times. Remember “(I’m Not Gonna Write You a) Love Song,” where Sara Bareillis flipped her producers the bird in musical format, only for it to became her album’s hit single? A similar thing seems to be happening here, where Sofia begins writing a book about Muslim dating, only to grow dissatisfied with the light, sexy, fun mandate given to her by her publishers/day job bosses. Since the novel itself—Malik’s novel—also started as a fun book about Muslim dating and grows more serious, one gets the uncomfortable sense of a real-life author-vs.-publisher spat bleeding onto the page.

As this arc unfolds, the novel sheds most of its Fieldingesque touches, allows grave and unhappy things to happen to its protagonist, and turns deeply earnest in its exploration of her love life. I found myself crying during a latter section of the book, not at a particularly sad event that occurs, but because I just felt so sorry for the heroine due to the way her loved ones were manipulating her emotionally. That certainly never happened to me while reading Bridget Jones’s Diary.

What I can’t decide is if that makes Sofia Khan is Not Obliged a success—because it isn’t just a rip-off of a much funnier book with added ethnic/religious flavor—or kind of a failure, because it provides a set of genre expectations that it gives up on halfway through, ultimately patronizing those tropes (and by implication, its predecessor novel) as frivolous and flimsy. This critique would hold a lot more weight if the first half of Sofia hadn’t proven, by comparison to Bridget, how hard really top-notch comedy writing actually is.

And here’s an admission: I think it’s a lot harder to write in most genres really well, than it is to break genre conventions. An upset of tropes can be done brilliantly, but too many works earn credit for bravery by doing so when, frankly, not meeting your reader’s expectations isn’t too hard. I don’t think Malik was aiming to be arty and daring here; she seems to have wanted to add authenticity to her characters and deepen their emotional lives in a way not suited to a lightly comic format. But even after it becomes more of a romantic family drama, the novel still gets a classic (for which read: flashy and improbable) romantic comedy ending. By creating a genre hybrid, Malik’s novel may be a little less successful than it would have been as one thing or the other.

Still, I feel confident in recommending this novel. If it were only for the genuine insights into a culture I know little of—glimpses that at times I related to strongly, and at other times was caught off-guard by—I’d still call it worth a read. If good books should be mirrors or windows, as Rudine Sims Bishop has put it, then this was both by turns. It’s also genuinely moving. If you are looking for a “Jane Austen readalike,” however, you will be disappointed. Family pressure to marry is here in spades, but that’s the only lingering taste of Pride and Prejudice in this curious creation, an adaptation-of-an-adaptation.

Me on Social Media